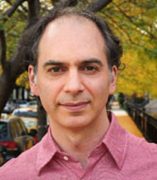 Anthony Laden is Professor of Philosophy, and, since Aug. 2012, Chair of the department. He is the Associate Director of the Center for Ethics and Education, a collaboration with the University of Wisconsin-Madison.  He received his PhD in philosophy from Harvard University in 1996. He works in moral and political philosophy, where his research focuses on reasoning, democratic theory, feminism, the politics of identity, and the philosophy of education. He also has interests in the history of moral and political philosophy, especially Rousseau, Kant, and Hegel. He is the author of Reasoning: A Social Picture (Oxford University Press, 2012), and Reasonably Radical: Deliberative Liberalism and the Politics of Identity (Cornell, 2001), as well as the co-editor, with David Owen, of Multiculturalism and Political Theory (Cambridge, 2007). He has published numerous essays on the work of John Rawls, including “The House that Jack Built” (Ethics, 2003), and most recently, “Constructivism as Rhetoric” (Blackwell’s Companion to Rawls, 2014).