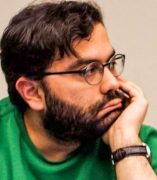 Mahrad Almotahari is an Associate Professor. He received his PhD from MIT in 2011. Before that, he was an undergraduate at Reed College, in the age fondly remembered as Olde Reed. He’s written (and continues to think) about various topics in the philosophy of language (including reference, coreference, anaphoric dependence, context-sensitivity, assertion, negation, attributive versus predicative adjectives, and verbal disputation), the philosophy of mind (e.g., Frege’s puzzle and related issues about the individuation of belief), and metaphysics (among other things, physicalism, haecceitism, material identity, modality, truth, value, and structure). His article, ‘The Identity of a Material Thing and its Matter’, was the recipient of the 2013 Philosophical Quarterly Essay Prize. His more recent paper, ‘A Little Puzzle about a Piece and Puddle’, was a runner-up for the 2018 Marc Sanders Prize in Metaphysics. Mahrad has an abiding interest in the history of philosophy, especially the medieval Islamic tradition. He frequently visits the School of Analytic Philosophy at IPM. In 2016 Mahrad was interviewed by 3:AM Magazine. Penultimate drafts of his published work can be found here. If you’re unable to access material from academia.edu, feel free to shoot him an e-mail. Mahrad is on fellowship during academic year 2018-2019.